The Colombian Government and the FARC have resumed in Havana their peace talks aimed to put an end to war in Colombia. The peace process started November 2012 and has not been without problems. In the last episode, the FARC threatened to make public some confidential contents of the talks and the Government with a total breakup if that possibility materialized.

Every peace negotiation is difficult, for reasons that range from the substantive issues in the agenda and the different positions of stakeholders to more ‘mundane’ motives like different political times. 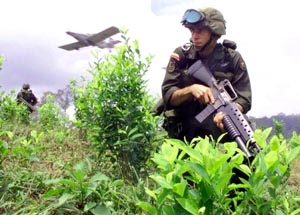 The war in Colombia has lasted for decades. Multiple and diverse armed groups have taken part in it, including a State that has not always behave according to the rule of Law and International Humanitarian Law. It is a dirty war that has included massacres, targeted killings, kidnapping for ransom, use of landmines, forced displacement of population and illegal appropriation of property, mainly land. A recent report has estimated that 80 per cent of the victims have been civilians.

Problems associated with the property and use of land were the origin of this conflict and still permeate many of its dimensions. The rural and agricultural model is based in huge land properties devoted to extensive cattle and agriculture for exportation. There are millions of farmers without access to land or no property rights over they lands where they live. The forced displacement of civilians and the appropriation of the abandoned territories have culminated an agrarian counter-reform which has only added to an already unequal system.

Drugs and narco-trafficking appeared at a later stage. The new illegal economy found fertile ground in remote and isolated areas with little or no State presence and vulnerable people. It enriched the cartels and trafficking groups and allowed the armed actors to fund the war. Even more, it permeated the legal economy and businesses and also benefited sectors of the elite. That never-ending influx of money sustained and funded violence by all parties and the war escalated as a result.

Those are difficult and substantive issues with no easy solution. But negotiation faces other obstacles. A short-term issue is the management of political times. The Government started conversations having in mind a more expedite process, and the president Juan Manuel Santos faces elections next year amidst declining popularity rates. He has also encountered fierce opposition of some powerful sectors, notably those behind the former president Alvaro Uribe. The FARC fear time for other reasons: what guarantees do exist about the future of the process if this Government is not re-elected?

Second, the parties are negotiating what concept of democracy and political representation will define the future of Colombia: based in political parties, as happens today, or with a wider concept that allow for the participation of social movements (as the FARC demand).

Third, what balance will Colombia get in terms of truth, justice and reparation for victims? The war has been so long that the number of victims is staggering. Parties have committed war crimes and crimes against humanity, as defined in the Rome Statute of the ICC. Last summer, the chief prosecutor contacted the Colombian Government to clarify issues of international justice and jurisdiction. There are negative precedents in this regard. The last one, the demobilization of paramilitary groups in 2006, in which they managed to get minimum penalties and short-sighted reparation provisions.

Sectors of the Colombian establishment (especially at the rural level) appear to demand no less than an absolute FARC surrender. This group claims for guarantees to join the political system (without facing another massacre like that of the Patriotic Union in the 80s and 90s). A possibility which is on the table is the call for a Constitutional Assembly to uphold the agreements and define the future of the political system.

Illegal drugs and narco-trafficking will be another huge obstacle. Colombia has applied the US drug war policies in their hardest versions. It has militarized the countryside and sprayed millions of hectares of land, without putting an end to a business that has always manage to react and adapt. This issue is politically sensitive in Washington DC and any agreement, be it temporal or definitive, will need support of at least non-interference by the US.

The good news: there is agreement on the first item of the agenda -land- which is also the most difficult. The agreed formula consists in the delivery of property rights among peasants, for actually non-productive and / or abandoned land (and properties decommissioned to cartels and kingpins). If an agreement over land has been possible, the others should be easier.

The voices critical with the process are many and wide-ranging. Civil society sectors claim for more participation and for channels to canalize their demands to the dialogue table. The victims demand justice, truth and reparation for the violations committed. Economic and political elites, especially in the countryside, are extremely reluctant to any attempt to change the status quo.

Nowadays all parties in this conflict are aware of one key fact: none of them has real options to win by military means. Uribe tried hard for 8 years as other Governments had done before. And nobody managed. The FARC had their best military and strategic options more than 10 years ago, but were severely weakened by Plan Colombia.

Commentary by Brennan Kraxberger about the world's most troubled places