This week, Daesh released a video in which the Jordanian pilot Lt. Muath al-Kaseasbeh was burned to death. The images have triggered retaliation by Jordan, including execution of some prisoners and strikes on Daesh targets.

A few weeks ago, Wikistrat conducted a two-day crowdsourced simulation in which its more than 45 analysts (including me) were asked to identify the ways in which the Islamic State could seek to penetrate Jordan. 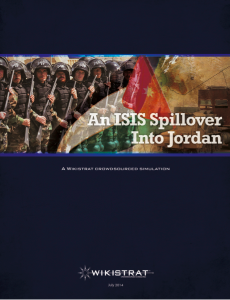 Conquests by ISIS have put the country of Jordan at risk. The group has proclaimed a caliphate that aspires to consolidate political and religious control over the entire region. An attempt by Sunni Islamist militants to infiltrate Jordan would pose a significant challenge to the embattled kingdom. But there are opportunities for the country as well.

Jordan already finds itself under great pressure, hosting hundreds of thousands of Syrian, Iraqi and Palestinian refugees — some affiliated with the Islamic State, Al-Qaeda and other Salafist groups. Originating from a variety of ethnic backgrounds, the country’s diverse population makes it vulnerable to the influence of radical forces. A serious infiltration by ISIS into Jordan would not only pose a threat to the stability of the Hashemite Kingdom but could also drag Israel and the United States into the conflict.

The result of our simulation is this summary report, which highlights four paths the Islamist organization could take to infiltrate Jordan. While none of the scenarios seem promising for the Islamic State, Jordan is under significant pressure from unprecedented numbers of refugees, chaotic civil wars on two borders, turbulent politics and an overall weak economy. Any major misstep could provide the Islamic State with an opening that is not readily apparent. At the same time, recent events may present Jordan with opportunities to improve its security as well.

If you wish to continue reading, the whole report can be accessed here.

As a Contributing Analyst for Wikistrat, I took part in a recent brainstorming session in which analysts were asked to propose the major news stories for 2014. Written in the form of a newspaper report, this scenario predicts a peace accord between Colombia’s government and the FARC.

The phenomenon of illegal drugs, and their different combinations and mixtures with conflict and violence are a source of insecurity in many places. But illegal drugs are a multi-faceted social issue and a business whose main feature is one: it has a global scope.

These maps, elaborated by the UN Office on Drugs and Crime (UNODC), are useful tools in order to visualize the global reach of the illegal drug business:

Just a few elements of this global chain. Small farmers without market alternatives cultivate poppies or coca leaves as a coping and survival strategy, from Asia to the Andean region. Organized crime groups and networks are responsible for transformation and processing, and take responsibility over the routes and logistic operations that allow putting them in the streets of the most lucrative markets. Along their way, some times drugs finance armed groups. And once in the markets, they can become a public security issue and always a matter of education, prevention and public health.

The ‘war on drugs’ has created additional problems. Among their pillars a few can be mentioned: a supply-side militarized approach towards the production and transit countries. This includes forced crop eradication (and voluntary projects, to a lesser extent); police and military deployments to dismantle cartels and close routes. And, in areas like Latin America, extradition of ‘bosses’ to the US.

There have been partial successes, but 40 years of war on drugs have not put an end to their global flow. Among the consequences there have been (and are) human rights violations and grave impacts on security and development.

This is a simulation about the “Emergent Progressive Era” that we have recently conducted in WIKISTRAT. This scenario explores how a process could develop to put an end to the war on drugs.

If you wish to read more, this is a recent article (27th July 2013), published in Spanish by the Institute of Studies in Conflict and Humanitarian Action (IECAH).

This report by Rachel Seifert shows a panoramic view of cocaine and the war agaisnt it. This is the first part of Cocaine: A History Between the Lines (2011):

And here, you can access all the parts of this report. Enjoy! 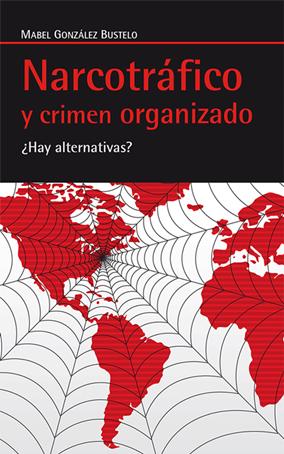